For those of you that know none of my background history, the route to my PPL has been none to easy. The message to those that are struggling to achieve their dream keep going it IS all worth it in the end.

The frustrations, cancelled lessons, bad weather, lack of money, aircraft unavailability, schools going belly up  all fades into the background against the feeling of elation and achievement when you are suddenly the holder of your PPL, and you realise that at last you have done it!!

It all started in January 2000 when I finally convinced myself I could achieve that dream.
Summer of that year, after endless cancellations due to weather, the flying school went belly up. I kept my instructor though, who continued freelance and made very slow progress.

The following April, by which time my instructor was working for another school, I finally soloed in a Cessna 152,

Shortly after, my instructor obtained a job with BA (good for her) and I struggled to find an instructor I could relate to. And, yes you guessed it, the school went belly up! Feeling somewhat discouraged I was then hit by a series of problems, both financial and personal, and completed no flying at all in 2002, followed by only 3 hours in 2003.

At the start of 2004, with life looking far healthier all round, I decided I had to bite the bullet and get this PPL done and sorted. I booked in to take my exams with a PPL Ground School in Bournemouth and completed all 7 exams in 4 days with pretty good marks. A good start then. At the end of February, with the money put aside for all training costs, I decided not to go to the USA, but to learn here (after lots of advice both ways). Im glad I did, even though it has cost more than it could have done (but lets not start that debate again!).

By the end of March I had done 24 hours and was well into my Navigation, having visited Llyd, Goodwood, Rochester, Bournemouth and Blackbushe. (An aside here : if you want to complete your PPL fairly quickly in the UK it can be done, but you need to be flexible and available almost on a daily basis to take advantage of any flyable weather).

My QXC was booked in the day before we went on holiday for a week. Yes, you guessed it, weather not suitable. 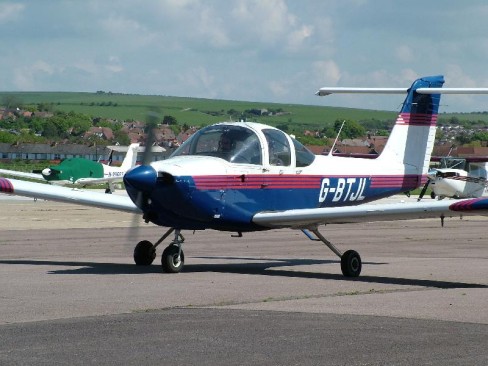 I completed it the day after getting back off holiday. For those that are interested it was Shoreham to Southend to Manston to Shoreham. A couple of hours revision later and my instructor announced it was time for my Skills Test (yikes!).

Last Thursday I was a bundle of nerves waiting for the following day. Friday came  and after 6 hours sitting around waiting for the weather to clear up I had to take the decision to cancel (one of the hardest airmanship decisions to make!). Trying to explain to friends and family why you have to cancel when theres barely a cloud in the sky is not easy. They dont understand haze and 7km visibility too well.

A weekend of anticipation followed, only to have to cancel again on the Monday.

Tuesday however dawned dry and bright. I planned the route, studied the NOTAMS, checked all the paperwork was in order, double and triple checked my weight and balance and my fuel and soon it was time to go. I booked out and my examiner elected to meet me at the fuel pumps. ATIS were giving a cloud base of 2500 .

Off we went taking off with a slight turn to the right for noise abatement on R21, and continued to climb in the overhead. Not for long though! That cloud base really did not look like 2500 from where I was sitting. At 1400 I levelled out. Within seconds I was forced to descend to 1100 to stay just at the base of the low cloud scurrying in over the hills. I started to sweat!

I decided to set my heading anyway and started my first leg. Looking down, I swear I could see the tails wagging on the dogs being walked on the South Downs and a quick bit of mental arithmetic told me I was pretty close to breaking Rule 5. I turned to my examiner and declared that owing to the unforeseen low cloud I was not prepared to continue with the Nav leg for safety reasons.

So, was I prepared to continue with the General Handling part of the test?

I decided yes and we found a hole in the clouds, settled at 3500 and commenced steep turns. I lost 100 on the right hand turn. Mmmmmm  I heard my instructors voice telling me not to worry about mistakes, you will make them, just keep going and move onto the next part. My left turn was great, until we had turned through 180 degrees and I felt the plane start to descend, over corrected it and ended up 100 high!

Stalling  the part I really was dreading. I had scared myself on my revision with a deep stall that dropped a wing severely (PA38 Tomahawk now by the way) and I had inadvertently used aileron. Not nice! My examiner instructed me to hold the stall till she told me to recover. B***** I thought. I neednt have worried though. I had barely even entered the stall when the voice to my right said recover. There is a god!! Incipient stalling was great, only lost 20 on the one in final configuration.

For the first time ever I managed to hold more or less 70 knots in the steep descending gliding turn and the recover from the spiral dive was easy. Thank you to my instructor who took me way beyond the level required for the test.

Oh dear! Where did the engine go? Forced landing here we come. Even managed to remember all the restart checks, MAYDAY call and shut down. For the first time I even remembered to set the transponder to 7700 (shame Id forgotten to turn it to on from standby!!!) And then it started to go wrong. We would have made it down though, even though I had to change my mind on the field at the last minute. If I had been a little cleverer and looked to my right when the throttle was cut I would have seen a large gliding field! Ah well, we live and learn.

On climb out the throttle was cut again (damn unreliable these engines!) and I would have made a suitable field. Shame it was downwind!! Why did I turn that way, when I knew where the wind was coming from? Brain overload I guess.

Then back to Shoreham for the circuits. To my mind they were the worst circuits I have flown for a very long time. Made the decision to go-around on the first attempt at a glide approach as I was way too high, not helped by having to orbit at the end of the downwind leg. Flapless approach was ok but should have been a few knots faster on the approach, but admitted my errors. And can you believe it, I forgot to call downwind on one of my circuits. Again I admitted my error. Wont ever forget that one again! 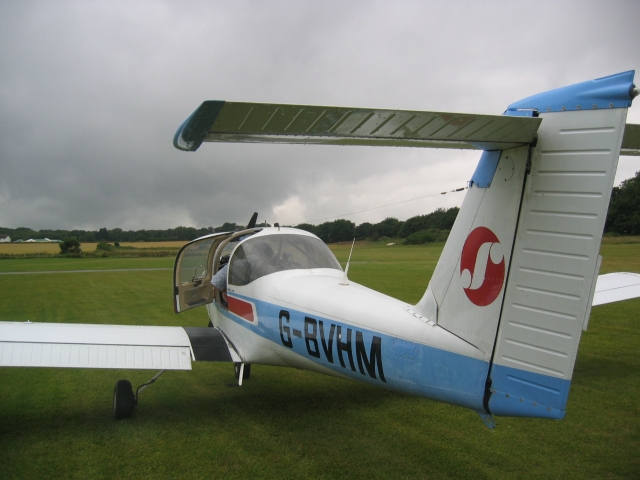 Wednesday dawned overcast and gloomy with heavy showers and CBs forecast with 4km visibility so we cancelled that early on.
Thursday morning did not look too good, but I presented myself at the school in hope.

My nav route had been changed from an easy one to an alarmingly more difficult one. Shoreham to Popham as a turning point and then to Biggin Hill, with the diversion somewhere on the second leg. Oh. Uh oh. Ah well, got on with the planning, weather improved significantly and we were off.

Changed to Goodwood, made a correction to get to Arundel, next was Petersfield, and then we were speaking to Popham. According to my examiner they do very good cakes there.
This was all going too well.
Especially as I dont know to the west of Shoreham very well.
The only time wed done this area was on a very bumpy day and it was all I could do to keep straight and level, let alone look at the view. So it really was a test. Cos I didnt recognise anything as familiar.

But surprisingly, Popham hove into view bang on target and on time. We circled over Popham whilst establishing contact with Farnborough Radar for MATZ penetration. When we did, a lovely helpful lady controller gave me a squawk code. Off we flew, me knowing that my journey was now going to be really hard work. Lasham hove into view to my 2 oclock but I hadnt realised glider sites can be tarmac so spent a minute worrying that I was the wrong side of Odiham.

Sussed out that Odiham was to my 10 oclock and could see Farnborough beyond that. Oh dear, forgot to ask for clearance through Odiham ATZ, and the helpful Farnborough controller very nicely reminded me to stay clear. Also to watch out for the Chinook passing right to left in front and 500 below.
Oh and multiple gliders in the area.
Oh and the Harrier passing left to right 500 below.
Oh and you have a fast jet 1000 above, maintain your level.
Traffic straight ahead, level unknown.
Turn onto 110 and descend to below 2000 to make way for jet traffic above.
And so it continued
Until we got to Farnham where my examiner diverted us to Midhurst.

Still getting numerous traffic alerts from my friendly controller I changed track, informed Farnborough and forgot to take into account the drift, which somewhat confused me at the halfway point as we were a fair way off. I corrected (still not accounting for drift!) and at the appropriate time was a couple of miles to the west of Midhurst (or what I thought was Midhurst). So I flew over to the town and circled, desperately attempting to identify the town.

The only way to do so was to do a position fix and that was the weakest part of the test. I let my altitude drop 300, my heading wandered and I started to go into meltdown. This had always been relatively easy, what was going on? So I asked to relinquish control for 30 seconds, closed my eyes, counted to ten and regained control. Got a fix, proved we were where I said we were and was asked to track to Seaford VOR. We held that heading for a while and then the foggles came out.

Did a steady Rate 1 turn onto a reciprocal heading. Successfully done. Do you know where we are? came the question. I worked out where we were (helped by the amount of gliders around) and set a heading for Shoreham and that was it really.

All over. Paperwork done and other than the R/T Practical next week, exams over for a while.

Booked a couple of hours differences training on the Warrior next week then just sat on the perimeter road trying to take it all in.

And Im going to take this opportunity to say thanks to Mark my instructor for pushing me really hard over the last few weeks, but doing it kindly, letting me make mistakes and then firmly correcting them without ever being over critical or rude. I look forward to flying with you in the Warrior next week! 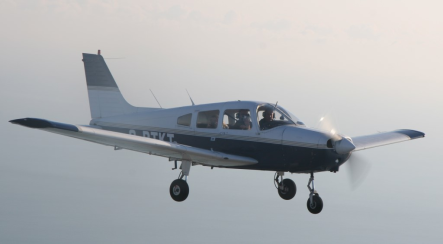