For photos of this fantastic machine, see below.....

The day dawned bright and sunny as I drove home from work.

However several hours later as I drowned my head under the cold tap in a desperate attempt to revive my senses, the clouds had started to roll in rather ominously.
Not to be deterred I threw a cup of coffee down my throat and jumped into the car, the nerves and excitement eating away now, getting stronger and stronger.

As Goodwood aerodrome approached, my palms started to moisten, only overridden by the eager sense of anticipation. The anticipation of being hurled through the air by one of the best sports aerobatic planes. The Extra 300.

On entering the office of Ultimate High I was greeted with a smile and the usual paperwork and indemnifiers to sign. I then squeezed my ample frame into an RAF style flying suit (you know, the baby bouncer type!) and presented with a list of nicknames to choose from. I was to become Ghostrider for the day. And on the red team for the Top Gun Experience. Probably the first and last time I will be referred to as Red 1.

There followed a very informative, yet relaxed briefing carried out by FlyGuy via a multimedia screen. This was going to be fun : A 9 litre, 300hp engine in an airframe weighing no more than a Lotus Elise which climbs at over 3300 per minute. A little more performance than the Pipers Im used to thats for sure. And we even get to wear a parachute, another first for me!! Just in case it all goes vertically indifferent you understand!!

Briefing over, we get to play on the simulators for a while to practice our ability at following the lead plane  I do hope my flying is better for real than on these. And then something all we aviators are very used to. The patient wait for the weather to buck its ideas up. The forecast had been good, the weather had other ideas. One aspect of the job I wouldnt fancy is trying to get over to the non flyers (and they all were bar me) that the weather can totally mess up your plans for the day. And how it would be a waste of their time and hard earned money to go up if the cloudbase is too low.

Thankfully after a couple of hours the cloudbase decided to shift to an acceptable level and we got the go ahead. We were strapped into our chutes and then inserted, yes inserted into the front seat of the Extras. My mount was an almost new silver and blue one, the other was a dramatic red and white one with a snarling mouth and wild eyes. Quite a picture. Shame I didnt take a camera.

Sat in the cockpit I had a throttle lever (with instructions to not touch) to my left hand side. To the right were the headset jack points. Ahead was an ASI and ALT. And a slip ball. And nothing else. At all. Apart from the imposing nose and one blade of the four bladed propeller I could see through the canopy. For those that wonder, the rear seated P1 has a comprehensive range of VFR instruments and a mounted GPS. The straps were tightened by the ground crew (thanks Mr Proach and Steve) and while I held the stick back the engine was coaxed into life. OOoer! This was a powerful machine, the engine burbling away like a TVR on steroids. As we sat there warming the engine the whole airframe rocked from side to side and as if in celebration the sun came out from behind the clouds and winked at us knowingly.

At last we pulled away and taxied to the holding point to carry out the power checks, the other Extra alongside us. And then we were off bumping across the grass, following through on the controls, stick forward, nose up, 80 knots and airborne. The sound of the engine was awesome climbing away from Goodwoods grass runway at 90 knots. The red and white Extra slid alongside as we climbed in the circuit in formation and headed toward the coast. Ive often wondered what it feels like to fly soooo close to another aircraft and it was as if they were joined by an invisible thread. We flew in formation until we were almost overhead Thorney Island (a disused airfield to the south west of Goodwood.

A sudden break to the left caught me off guard  boy do they roll quickly!!! Straight into effects of controls. What a wheeze In the Tomahawk Im used to you turn the yoke .. and .. you roll. In the Extra you think about moving the stick and suddenly you are in a steep turn. Wow!! Suddenly Nitro (my instructor) turned the plane on its back. Anything fallen out? he enquires casually. Having never been deliberately upside down in anything I try to recover my composure and mumble a negative.

It all starts to happen rather quickly now.

Nitro starts giving me the spiel about aileron rolls, nose up like this at 5 degrees then left aileron, slowly at first (ha ha ha!!!) so that the force of the turn doesnt cause the fuel to burst out the end of the wings then quicker to around 400 degrees per second  yes 400 degrees per second!! Having completed the 3 rolls in about 3.5 seconds he simply said you have control and asked me to demonstrate for him what he had just showed me.

I never ever dreamed I would actually be given control, albeit with an instructor behind me. And he did give me total control. And even more amazingly I actually did it. The world span around quicker and quicker in front of me and we even almost rolled level. Result!!!

Nitro took control and demonstrated a steep turn. And when I say steep it was about 10 degrees from a 90 degree turn. Boy these RAF guys fly soooo accurately. Seconds later my turn, small amount of back pressure and round we go, on a sixpence. Straight on then into a demonstration barrel roll. Nose about 30 degrees up then roll the wings increasing the roll rate as we go upside down and corkscrew back round and again. Again my turn to demonstrate to him that I had been paying attention for the last 5 second lesson. It really happens so quickly, the world revolving in front of you.

Nitro spotted a gap in the clouds. Straight into a demo of a loop. Oh my God! So thats what it feels like. And then the inevitable you have control. OK, so look out at the left wing. Stick back. Keep looking at the wing. Ease off the back pressure a little as you go through the vertical transferring your gaze to the upside down world outside the canopy and increase the back pressure again as the ground races back up to you. All in a matter of seconds. Second attempt I even hit my own wake turbulence on the exit from the loop. Yippee!

We regroup with the other plane and practice following each other and then the whole point of the brief training sortie. A battle against each other in the sky  yes really flying the plane and trying to hit the opponent who is dodging and weaving in front of you. When you get a hit, the enemy trail a two second burst of smoke and off you go again, tightly turning, powering your way up into the sky, rolling on your back and spiralling downward again, looping around after each other through the sky. Quite incredible.

After a particularly steep climb and a seemingly ever tightening turn by the instructor in the enemy plane, rolling over on his back whilst turning through the sky I came a little too close and handed back control to Nitro. The recovery (or avoidance methinks) involved a fairly high negative g manoeuvre and suddenly the fun was over. My stomach decided this was a little too much and Nitro quite rightly called the sortie off as I battled with cold sweat and gulps of fresh vented air, desperately trying not to use the bag so kindly provided to us all.

I was told to formate on the other aircraft to take my mind off it and after a couple of minutes I was feeling 95% again. We landed back at Goodwood to a de-briefing session and a certificate, with huge grins on our faces and an enormous sense of achievement. I, for one, never thought I would be lucky enough to have 40 minutes of Extra 300 time in my logbook so soon after passing my PPL. And for those of you that are tempted by this tale to go and do it for yourself, yes you really do have control of the aircraft and what a wonderful aircraft it is.

I learned today what flying by the seat of your pants is. And I would recommend it to any pilot or non pilot. 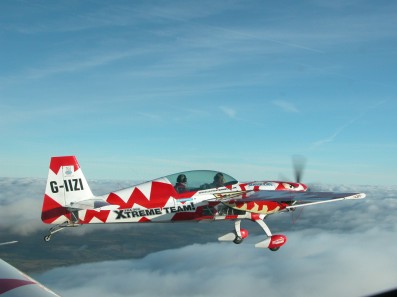 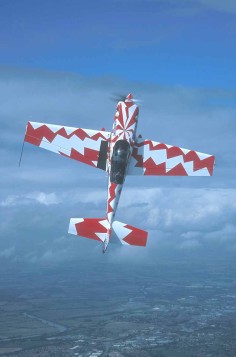 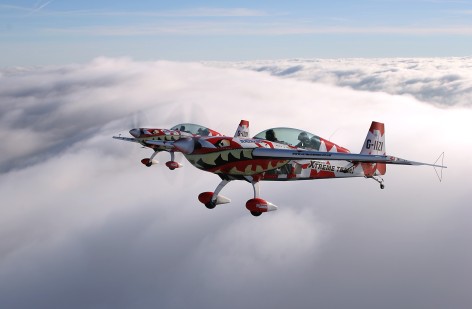 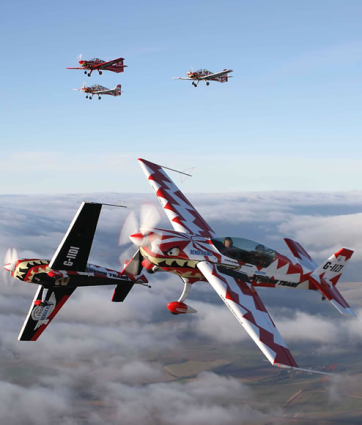 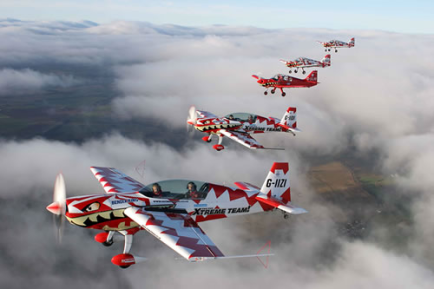