E-mail me here if you so wish

A Little Bit About Me 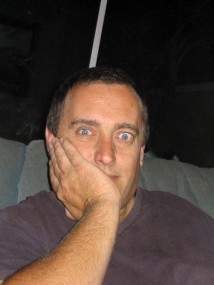 I was born in Pietermaritzburg, South Africa too long ago to think about now - well, ok in 1965. I lived there until my parents divorced and we found ourselves in the UK, back in Wednesbury, West Midlands, where my mother was born. My father (a Geordie), elected to stay in South Africa with his job and the good weather

Upon securing a job 'darn sarf', my mother, sister and I moved to a tied farm cottage, pretty cool for a young boy. It just so happened that the farm was directly under the stacking hold for Gatwick Airport and I spent many happy days admiring the aeroplanes passing overhead, whilst poodling around on a tractor pulling a hay trailer.

My mother remarried and we moved a few miles away; even better we were on top of a hill and my bedroom window looked over towards the same area that held those aeroplanes for Gatwick. I remember well the bright orange Braniff 747's circling as they waited to land.

As I got older I was allowed to cycle further and further afield. I was a fit young lad, thinking nothing of cycling 100 miles in a morning (oh if it was only the same now

), so I used to take myself off on the 30 mile ride to Gatwick and sit there with my camera taking shots of all the aircraft. I remember being taken as a treat by car to Heathrow one day and spending the entire day in awe of the place! Sad, innit!!

The motor car took over as I turned 17 and after a rejection from the RAF later that year (after a 4 day selection at Biggin Hill), having not gained the 3 A levels they wanted me to have (which included Maths and Physics), the thought of flying left my conscious thought for a while, though I was forever wandering around with my head skyward. My mother was single again, I wasn't aware of the opportunities available for airline sponsorship, I was even laughed at by a careers advisor at school when flying for a living was mentioned, so I assumed that flying was forever going to be out of my reach, left for those rich enough to do so.


I started work after my A levels, deciding to earn a living rather than attend Uni. I worked my way up to be a Relief Manager for Ladbroke Racing, before leaving that rather poorly paid job to sell cars for a living. The early 1990's recession saw me redundant, making my own living buying and selling cars, which became more and more difficult as customers wanted more and more for their £500 or £1000.

A friend of mine asked me to drive his taxi on a Friday night. I figured it would be a laugh and having obtained my licence I did so. Then covered Saturday night, then Sunday night then a couple of nights during the week

I decided that I really ought to get a "proper" job again, with a lot of pressure from a then girlfriend! So I went back into sales, selling kitchens, hoovers and then vending machines. It was OK and the money was good, but I hated being tied to working for someone else again.

The guy who owned the said taxi company retired. I rather rashly bought it. I then spent the next few years working all the hours under the sun, all times of the day and night. A girlfriend at the time bought me a trial lesson and I was hooked. It was not until a few years later, having established the business rather better, that I decided the odd lesson here and there wasn't working, so I retook my by then out of date Air Law exam, along with the 6 other exams required and went for it.

6 weeks later I was a pilot. The rest is history.

I have since given up the business, getting through the ATPL Theory exams in 2008 and the Commercial Pilot Licence flying test in 2009. Then the Class Rating Instructor course and qualification later in 2009, followed by my JAA Multi Engine Instrument Rating in 2010. Now to find a job!

My mother lives 7 miles from Shobdon, Herefordshire. She is never happier than when she is painting and has recently started painting aircraft too.

My sister lives on the Welsh Borders and is happily married though unable to work any longer. She was a violinist, having obtained a job with the Barcelona Symphony Orchestra before cruelly and unkindly being struck with Rheumatoid Arthritis in her early thirties.

I live on the south coast, just to the north west of Brighton, with my black retriever Seamus and my fiancee. 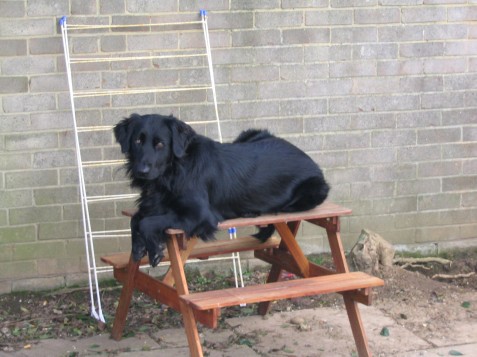 I also have a passion for photography, though I am the first to admit that this has suffered recently. Time to get myself up to date again on that score I reckon.

A flying tours company in the Caribbean, watching the sun set as I lean against my bar...... 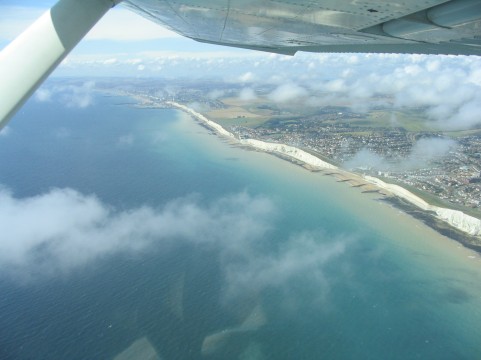 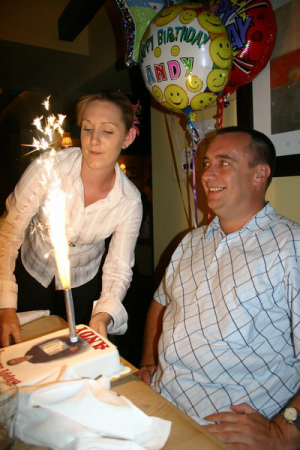 Me at my 40th Birthday celebration organised by some pilot friends